How Memory and Time is Preventing Your True Freedom

How could memory or time be distracting me from who I am? We put so much emphasis on memory, like when you have a conversation with somebody, what you talk about. Or when you see an old friend and you talk about the past, or the way things were, or you get into talking about the future.

It's very difficult for people to be really present, especially with your devices and everything. You sit down to have a conversation with somebody, and you're doing a bunch of things at once.

We're coming to this time now, where we realize that that's taking away from the quality of life. And science is backing that up, that multitasking is not actually something that can be done. It's just doing a bunch of tasks in a very poor manner versus doing one very well.

Memory causes you to feel small.

Unless, of course, you've had a life where up until this present moment, everything in your life has supported you to feel like the best version of yourself. Most people can't say that. Most people have had a bunch of different experiences, and then base their perception of reality on that memory. Like we say, the body should be able to live many years because that's the way it's always been. Well, the way it's always been isn't necessarily true. There's always the potential for some shift or change.

And the way things actually are is emerging infinite potential. That's the world that we live in. You look at it. You see it everywhere and you acknowledge you’re that. As soon as you start living in the past or in the future; the present moment is made up of the past and the future. That's how we got to where we are. But if you start focusing on only the past or memory or time, you may start thinking it can only be like this, like tradition. That's the danger with tradition. Tradition says that this is the “tradition” and we must not color outside of the tradition.

How did it become a tradition?

Usually it became a tradition because somebody did something different than the tradition. Jesus is a good example. Somebody came along and said “I know you all do it this way but that doesn't make sense, so now we're gonna do it like this”. And everybody goes, “Oh wow! that really works!” Well that was somebody being very present, not going “well we must do this because so-and-so said that we must”, and then it creates a tradition.

That's tapping into the emerging infinite potential that's everywhere. That's who you are. Everybody has the capacity to do that or to be a Buddha. But the way you do it is, you have to put aside the expectations of the past. That can be a challenging thing because you're conditioned in school not to do that.

You must do it this way.

How do you learn in school? Do they tell you your emerging infinite potential is the focus? Is the focus your breathing that's happening in the present moment? Not really. Maybe it's changing.
I'm watching my daughter. She's six and being educated. It is changing from when I was a kid. But, there is a lot of focusing on the way things were, and there's room for that, but that shouldn't be the primary focus.

The primary focus is that in every moment are millions of possibilities, and then you create each day like that. When you wake up in the morning you start fresh, and you always have the opportunity to start fresh. But when you start placing a lot of emphasis on the surface, i.e. thought, memory, even the “some day when I…then I'll be happy…”, that's not very present and it's very limited.

How do you know? What if you tried something completely different? It's like when we reminisce about the good old days. I remember when I was a kid and I ate a radish. I had never tried a radish before, and then later that day I didn't feel well and I got sick. I put it in my head that it was because I ate the radish. Then I didn't eat radishes for a long, long, long time. I created this whole story about radishes based on the memory. When I was older I thought, “Oh, what could be the harm? Let's try the radish”, and nothing happened. That's a good analogy of when we base things on memory.

Sometimes things happen to us in the past that allow us to correct some kind of behavior.

But I think that ultimately as meditators and spiritual practitioners, the path in the end is no path. The techniques that you use, that you learn from the past, are like a raft to get you across the river. And if they get you across the river, you don't pick up the raft and take it with you. You leave it there. Imagine that you're going on a journey and you have to figure out some way to get across the river. You try all of these things, and then you create this raft to get across based on your failed attempts. You get to the other side. That’s great, but what happens if we come to another river? Let's take this raft with us? Then you have to travel with this stupid raft with you the whole time. It doesn't work like that.

Don't we all want to recognize that we're emerging infinite potential? That we are not something that happened to you when you were a child, or limited in some way because of your gender, or the color of your skin, or how much money your family had?

You are a part of nature. You are emerging infinite potential.

And if you can stay focused on that, in the present moment, you're completely free.

Question: Do you, yourself, find that memory doesn't trouble you very often anymore? Or do you still encounter it where you have to observe that?

It pops in. It’s like sifting through thought, like “oh that's useful”, and then you use it. And other times, “Why am I even thinking that? That's not me”, and then you leave it.

Maybe it would be nice if you could just completely clear the database. But there are some things you would like to remember. It's just creating a healthy relationship with it, where you are not defined by memory. It’s something that you have, like fingernails. Fingernails are useful. Imagine if you didn't have any. If you had a hangnail before or a nail fall, it’s painful, but that's not who you are. It's useful but you are the user, don't be used by it.

Question: I think that is a useful way to think about it, for more simpler, smaller memories. But what about one giant traumatic memory that got you locked into a sort of mind frame? What can we do about that?

Well, you develop a practice where you're constantly reminding yourself that you are emerging infinite potential. How do you do that in a practical way? You connect to that part of you that was there, even before the Big Bang. What was there before the Big Bang? Sound… Breath… You just pay attention to the breathing. With sound, I don't even need anything specific. Some people don't want to do a mantra because they think it's part of some belief system or doctrine. They have hang-ups.

One way you can really practice sound and observe your emerging infinite potential is to go somewhere, like a park, and close your eyes or keep them a little bit open. And try and listen to everything at once. You hear!

Doesn't it expand your view? When you're thinking about your thought or your problem, it becomes as vast as this. But it's one small thing. But if you go and you just listen and you hear there's children over here, there's wind and the trees over here, over time you won't even be labeling it. You’ll just be listening to everything at once. All of a sudden you have this experience of the vastness of life and there's freedom in that.

I'm not saying, try and listen to everything at once and all your problems disappear. The end result of all of this stuff is to realize that you're it. Why go looking to get something out of life when you’re life itself? That's who you are. You are all of this. So yes, you may be experiencing that problem, and it may seem debilitating, but broaden the lens a little bit, and you'll see who you are. How to Live Wild and Freespirituality, Teachings 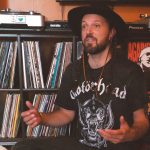 Discovering Who You Really Are Through MeditationKundalini, Meditation, spirituality